Are you planning to mark this year’s International Women’s Day on Sunday (March 8)?

This global day celebrating the achievements of women also marks a call to action for accelerating equality.

This year’s 2020 campaign theme is #EachforEqual. (This explains those Twitter posts of people making equal signs with their hands.)

People are being encouraged to actively choose to challenge stereotypes, fight bias, broaden perceptions and celebrate women’s achievements. It argues that equality is not a women’s issue, but a business issue, where gender equality is essential for economies and communities to thrive.

Fittingly Manchester, the birthplace of suffragette Emmeline Pankhurst, has a variety of events so everyone can get involved. Here are just some that caught our eye for #IWD2020.

Go along to the Central Library to hear from three mums who’ve begun inspirational business journeys.
Hear Sumayra Ahmad on Reflections of a Childminder, from Alice and Around the Box, a new product combining family and fun and Makisha Jameson on how she became an entrepreneur mum making natural skincare products from home.
Friday 6 March, 9.30am to 3pm, BIPC Seminar Studio, 2nd Floor Central Library, St Peter’s Square. Free

From running event companies to heading up large firms, charities, festivals and more, it’s time to hear from the businesswomen of today about what qualities they believe make a real leader, the challenges they have faced and how they would like to impact women’s rights today.
Hosted by Lisa Morton, founder and CEO of PR firm Roland Dransfield and promising a wealth
The event is a collaboration with Elle for Elle. This voluntary organisation collects body-care, haircare and cosmetics from public donations and gives them to women’s refuges and shelters. There are an estimated 1,200 bathrooms in those UK shelters that require toiletries.
Friday 6 March, 8am to 10am, 20 Stories, Spinningfields. £25 (£5 to charity)

This free event is open to all. As the organisers stress, you don’t have to be a woman, just a supporter of women. Expect a ‘glorious noise’ so take along instruments to bang and clang, or join in with the chants and singing. The destination will be St Peter’s Square. In Central Library there will be an end-of-walk event marketplace and networking from 1.30pm. This will include a range of activities for all, plus find out more about health, employment, education, services and opportunities for Manchester women and girls.
Saturday March 7, from noon, meet outside Manchester Cathedral, Victoria Street.

Celebrate IWD with a guided walking tour of Manchester’s hotspots of radical political activity. Join walk leader Steve Roman on the Manchester Peace Trail and find out just how deeply the city is rooted in the fight for justice, peace and freedom. Starting at Emmeline Pankhurst’s statue, you’ll explore sites around the city centre that have played a part in making Manchester a centre for peace, industry and radicalism.
Sunday 8 March, 1.45pm to 3.30pm, St Peter’s Square. Tickets by donation.

The Feminist Roadshow is a new partnership between the campaigning charity Fawcett Society and comedy community Funny Women. The afternoon workshop will have fascinating panels and talks, including the Know Your Worth Workshop for the chance to tell your own story, create your own comedy material, interpret body language and become more confident and memorable. There’ll also be a panel discussion ‘Is Greater Manchester Working for Women?’ The evening’s comedy show will then be headlined by award-winner Jayde Adams and other hilarious acts.
Sunday 8 March, 1.30pm to 10pm, The Frog and Bucket, 102 Oldham Street. £12 for both events, £5 for the workshop only.

Finally, if you’re in the vicinity of Spinningfields, then check out The Avenue steps which have been redecorated with a dozen vibrant book covers by influential female authors. They include classics such as Mary Shelley’s Frankenstein to modern bestsellers like White Teeth by Zadie Smith. 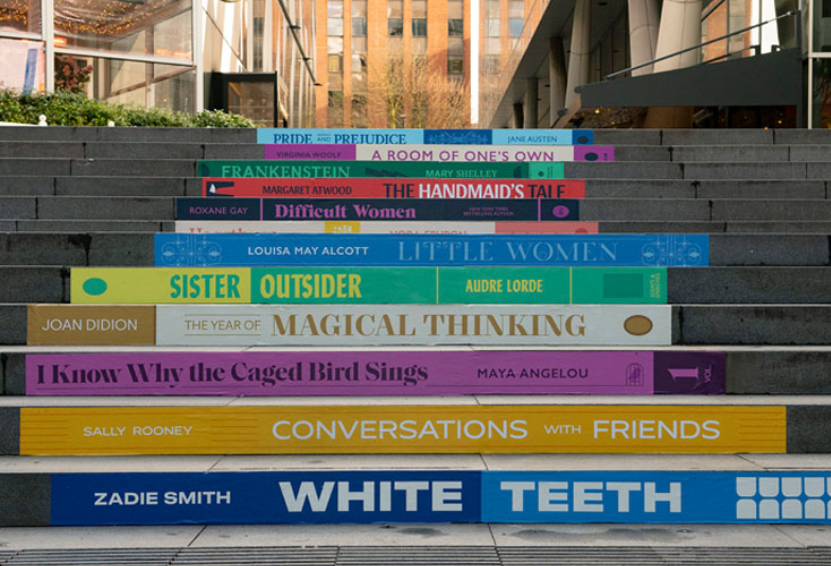 We’ve written previously about some inspirational women we think you need to know about.