Do we need an International Men’s Day?

Every March there’s a flurry of social media activity as International Women’s Day (IWD) is celebrated.

Such is the heightened awareness of the growing event that it invariably prompts Tweets asking if there’s a similar occasion for men.

The answer? There is and it takes place every November 19, that’s this Thursday.

While IWD has a history going back more than a century, IMD is a newer addition to the calendar and has been lower key (presumably why people, men mainly, ask if such a day exists).

And, after all, in a world where misogyny and sexism are still very real issues that are only gradually being addressed, do we actually need a day to ‘celebrate’ men?

Well, while men may still have work to do to help level playing fields, there are other pressing issues that deserve a spotlight.

The list goes on. And, while there are lots of statistics which show how women have got things tough, this isn’t meant to be a competition.

Achievements all can recognise 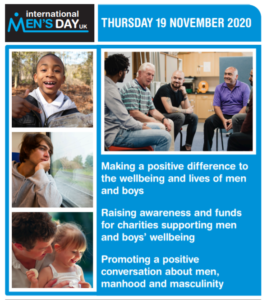 November 19 aims to make a positive difference to the wellbeing and lives of men and boys. It promotes a positive conversation about men, manhood and masculinity. It also raises awareness and funds for charities supporting men and boys’ wellbeing.

In fact, the first pillar of IMD is to promote positive male role models; not just movie and sports stars but everyday men who are living ‘decent, honest’ lives.

And the second is to celebrate men’s contributions to society, community, family, marriage, childcare and the environment.

Those are achievements we can all recognise in people around us – in fathers, brothers, sons, friends and colleagues.

There’s a range of events lined up to mark the occasion from panel discussions to fund-raisers and well-being advice sessions.

Just as International Women’s Day does not preclude males from celebrating female achievement or highlighting causes, the same applies in reverse on Thursday.

And, who knows, with enough support in 2020, more men may finally realise they have their very own international day.

Follow events on social media with #internationalmensday or on https://www.facebook.com/InternationalMensDayUk

For the first time in the show’s 21-year history it will be rebranding as Loose Men for one day only, with an all-male panel hosting a special episode to coincide with International Men’s Day. Marvin Humes will be joined by celebrities including Love Island’s Iain Stirling, singer Ronan Keating and TV presenter Roman Kemp.

→ You can see what we’ve previously written about International Women’s Day here.