This year the summer holidays may present a challenge to parents as they try to entertain their children. The school break has arrived after lockdown saw many children housebound meaning families have had to get creative to make days fun and exciting. The gradual easing of restrictions across the UK has allowed for more social interaction and travels further afield for family time.

To help make the most of the summer break and to offer some inspiration to keep your kids entertained, we have compiled a list of 10 classic children’s games. Every game on the list is free and will encourage your little ones to get outside.

This age-old game was first mentioned in one of the classic Winnie-the-Pooh books. To play, head out for a family walk on the hunt for a bridge over a river. Once you arrive, each choose a stick and simultaneously throw them over the side of the bridge, against the flow of the water. Run to the other side of the bridge to watch whose stick appears first, they are the winner!

Another classic that is bound to take you back to your days in the classroom. The only thing you will need is an adult in charge of the music. For Musical Statues, everyone should dance (the crazier, the better) until the music stops, at which point everyone has to freeze. The last one to do so is out! To play with chairs, there should be one fewer chair than there are players. When the music stops, everyone must sit on a chair, the slowest person won’t have a chair to sit on and will be out. Continue until there’s a winner.

Be prepared for some dirty fingers after playing this game. Adults should bury some toys in the garden that children then have to find and unearth, like a scientific discovery! This game is simple but lots of fun for little ones, be sure to supervise to avoid a garden massacre. 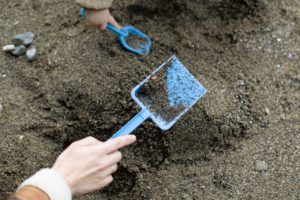 This one could get a little messy

All you need for this timeless game is a piece of string tied in a loop. This is a great activity for children aged seven and older, as it involves learning a clever technique to make patterns with the string using your hands. The game can be played individually or by two people and is great for mental stimulation, finger dexterity and coordination.

For this game, one player (‘grandma’) faces a wall, while the rest line up side-by-side at the other end of the room or outdoor space. When grandma turns to face the wall, the other players must try to creep closer to her. As soon as she turns around, all other players must freeze. If grandma catches any of the players moving, they are out. The winners are any players who manage to creep all the way over to grandma without her seeing them move.

This game is a little bit more complicated, but great fun for larger groups. You will need a big outdoor space and two items to use as the ‘flags’, like jumpers or hats. Players divide into two teams, each with their own flag item. The aim of the game is to run into the other teams territory, retrieve the flag and return safely back to your own territory, but it isn’t that simple. Players can tag members of the ‘enemy’ team, sending them to jail. To get out of jail, players must be tagged by a member of their own team, but only one person can be released at a time.

These games start with the popular playground song Pat-a-Cake and get more and more complicated and challenging. There are some brilliant resources online to help kids to learn the various songs and handclap techniques, like the website Ice Breaker Ideas which has a list of 15 games with instructional videos.

To play Duck, Duck, Goose all players must sit in a circle, except for the first person who is chosen to be ‘it’. The chosen player will walk around the outside of the circle tapping the other children on the head, saying ‘duck’ each time until he decides on a player to call ‘goose’. The ‘goose’ runs after ‘it’ around the circle, trying to tag them before they take their seat in the circle. If the goose fails they become the new ‘it’. If they succeed, they will retake their previous seat in the circle and the game will continue. 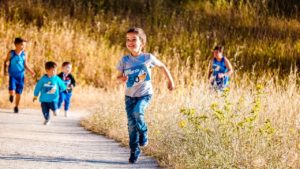 Looking for a place to hide

We couldn’t write about classic children’s games without including hide and seek! The seeker counts to 100 while the hiders find a spot nearby to hide in. At 100 the seeker shouts ‘ready or not, here I come!’ and goes looking for the rest of the players. The winner is the last player to be found.

We hope these classic childhood games have given you inspiration for the next time your kids need entertaining! Let us know if there are any other games you like to play.

We have also written about socially-distanced family activities!