Almost a third of all marriages involve one or both of the wedding couple re-marrying, latest figures show.

The data also reveals that while there has been a gradual decrease in marriages and first marriages since the 1970s, the number of remarriages has stayed largely the same with a slight decrease from the mid-2000s.

The headline grabbing fact from the release of the marriage statistics for England and Wales in 2019 was that marriage rates for opposite-sex couples have fallen to their lowest since 1862.

The figures also revealed the percentage pursuing a second chance of love after the end of a first marriage.

In 2019, 14.7% of weddings were among couples where both partners were remarrying. 17.4%, involved couples where only one partner was previously married. 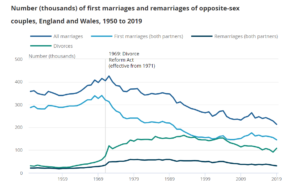 Dr James Tucker, Head of Health and Life Events Analysis for the Office for National Statistics, said: “The number of opposite-sex marriages has fallen by 50% since 1972.

“This decline is a likely consequence of increasing numbers of men and women delaying marriage, or couples choosing to live together rather than marry, either as a precursor to marriage or as an alternative.”

*Annual marriage statistics are only published around 26 months after the end of the reference year. This is due to delays in the submission of religious marriage entries by the clergy and authorised persons.

→ Archive read: Re-marriage on the rise for the over 50s