A thought-provoking evening at the theatre

This week Team Merrick went to see The Lady in Red, an original play by the Certain Curtain Theatre as part of the Greater Manchester Fringe Festival. It was one of two plays focussing on abusive relationships and had only two performances listed at The Lowry.

The Lady in Red is an award-winning play written by Claire Moore and John Woudberg, the founders of the Certain Curtain Theatre. The stage play was first published in 2013 but the duo have been producing domestic abuse drama for more than a quarter of a century. In their production, Claire Moore herself plays the titular character, Rose, in this one woman show.

A short play at only 45 minutes long, we didn’t know quite what to expect. However, going by its latest reviews, we anticipated a promising night.

The lights come on and a woman dressed in red dances alone, nursing a glass of gin by a Christmas tree and an open suitcase. As she turns around, the blood about her temple and on her neck becomes suddenly visible. Rose’s memory is hazy and she cannot recall the events leading up to that point or even which day it is. 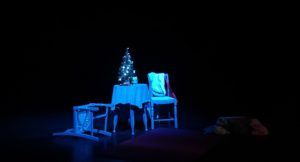 The scene that greeted the audience

Using powerful visuals through the colour red, she explores how a relationship of passion devolved into one of control. Piece by piece she gave up her friends, her career and her financial independence. Her only escape from both the verbal and physical abuse is in her mind: into pure white, untouched and numbing snow.

Yet, in the real world, she struggles to leave. Her lack of a support network is one key reason. Her closest friends, she hasn’t been in contact with for years. She believes her family would only reproach her, that despite years of warnings she ‘has made her bed and must now lie in it’. The police aren’t an option either, for fear it would bring more conflict rather than peace. That peace she can at least get from the familiarity of the cyclical patterns of his behaviour and the security of knowing she has a roof over her head.

It was obvious Rose is a strong woman suffering crippling paranoia and a lack of self-confidence. We witnessed her internal struggle as she chose between an uncertain future and remaining in a cycle of abuse at home with the man she still loves.

It doesn’t seem right to reveal how things turn out. One thing, however, is made abundantly clear: leaving abusive relationships is not a clear cut or easy choice and outside support is crucial.

Whilst we all were thoroughly absorbed by the play, it is a distressing subject that does arise in legal proceedings.

At Merrick, we offer support to our clients and help them acquire assistance they need to be able to start their lives afresh.

Our Access Us scheme is in place to help those who may otherwise not have the finances to get the advice and action they need.

No matter how isolated someone might feel in a difficult situation such as this, they are never alone. There are multiple services available specifically to them, some are listed on this page.

Our thoughts on The Lady in Red:

Heather:
I thought the play was powerful and cleverly written.

Keira:
It was certainly thought-provoking to see domestic abuse from the perspective of the abused party.

Amanda:
I was hoping to gain to a different perspective and better understanding, and it didn’t disappoint.

Mollie:
It was enlightening and well worth watching.