Today we highlight another six local heroes of the pandemic to brighten your day and get you in the mood for tonight’s #ClapForCarers.

And, of course, we’d like to join in saying a huge ‘Happy 100th Birthday’ to Captain Tom Moore, who featured in our first set of heroes. He’s now raised more than £30m for NHS Charities Together. Sir, we salute you and all our other heroes and heroines. 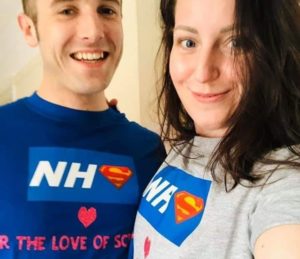 This nurse from Pilgrim Hospital in Lincolnshire set up the Facebook group For The Love Of Scrubs to address the shortage of medical scrubs available to NHS workers and volunteers. The group has since gained more than 50,000 members all pledging to use their sewing skills for frontline workers. Within the first two days more than 260 uniform sets had been created by the army of volunteers. Ashleigh has now set up a Just Giving page requesting donations to purchase materials for the volunteers to use. The page has already surpassed its £35,000 target. If you have the skills and equipment, Ashleigh is encouraging you to #StayHomeAndSew.

These three Northern Irish brothers have been painting the town blue. The creative trio have transformed their local area of Londonderry by painting NHS murals around the city. The men hope their artwork will be a symbol of solidarity, encouragement and support to key workers in the area. Their work contributes to murals created by other artists across the country. Controversial political images have been replaced with powerful paintings of doctors and nurses and the words ‘thank you NHS’. The Logan brothers have made a wonderful contribution to support their community. 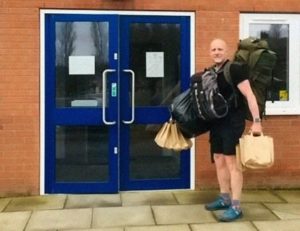 Assistant head teacher at Western Primary School in Grimsby, Zane didn’t want to let his pupils down when schools closed in March. The school is located just outside of Nunsthorpe where nearly 50% of children are living under the poverty line. Zane was understandably concerned when schools closed and decided to hand deliver meals to more than 100 vulnerable students. By walking more than five miles a day, Zane makes sure the children are still receiving a good lunch meal without the risk of having to go outside and is also able to check in on them at home. 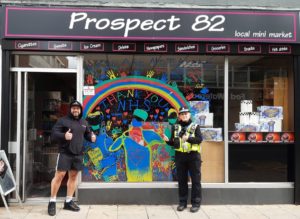 The owner of House of Ink tattoo studio in Hull and now the leader of a team of volunteers helping to get the necessities to those in need. Mr Eyaad has created ‘You Are Not Alone’ boxes full of essential groceries, which he has mostly funded himself. The team has already delivered more than 1,500 emergency supply boxes to elderly and vulnerable people in Hull. They are now calling for donations to keep the project running. Local company Hider Food Imports has chipped in by donating boxes to carry the goods and Troy is now requesting food donations to be delivered to his store. 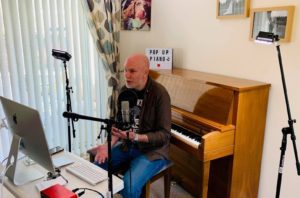 After starting his Pop Up Piano concert for the NHS in March, Geordie musician Mark has been astonished to find that his attempt to boost morale has taken off. The talented pianist made his live concerts a weekly occurrence, in one covering Local Hero by Dire Straits’ Mark Knopfler. After coverage by BBC Radio Newcastle there was an influx of requests to release the song as a single. Knopfler approved the use of the song and Deeks set to recording his piano cover of Local Hero.  All earnings from the track are being donated to NHS Charities Together and further donations are encouraged through the Sing United Just Giving page. Mark has already raised more than £2,000. 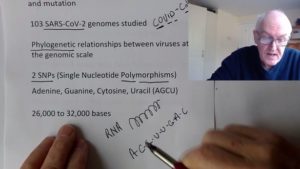 The 62-year-old British doctor has set up a YouTube channel to educate the public on COVID-19. His clear and easy to follow daily advice videos have gathered millions of views. Many viewers praise him for his ‘down to earth’ manner, as he dictates science-driven guidance to his 650,000 subscribers. Dr Campbell’s background as an A&E Nurse and Nurse Teacher have given him the knowledge to truly understand the virus, so that he can pass on essential advice and factual information to those who need it.

Do you know any heroes who deserve a shout-out? Let us know, email admin@merrick-solicitors.com!