The BBC’s Normal People has quickly become one of the nation’s TV favourites.

The 12-part series tells the beautiful tale of teenage sweethearts Marianne and Connell and the evolution of their relationship. A major theme throughout the series is the mental health struggles of both main characters.

The series concluded its BBC1 run in #MentalHealthAwarenessWeek, providing an unmissable opportunity to explore the impact of the honest and realistic portrayal of the mental health struggles expertly brought to life by lead actors Daisy Edgar-Jones and Paul Mescal.

Both Edgar-Jones and Mescal are tasked with portraying complex characters who each have their own mental health journey. Marianne is impacted by bullying, an abusive older brother and a negligent mother, experiences that effect her various romantic relationships.

The male lead, Connell, played by Mescal, struggles with anxiety and depression throughout the series. His journey into depression is a particularly poignant storyline, shining an important spotlight on mental health struggles in males. This is an issue which impacts 1 in 8 men in the UK with suicide the biggest killer in men under the age of 45. In Ireland, where Normal People is set, men make up 80% of suicides.

The show also cleverly incorporates the isolation and loneliness that many young adults feel when they leave for university. Connell describes a feeling of despair at the loss of his old life and high school friends, something many young viewers will relate to.

The prevalence of common mental health (CMH) disorders is rising in students.  In 2019 21.5% were reported to have a current mental health diagnosis. Suicide rates in this demographic have also risen in the last 10 years.

The realistic portrayal of mental illness through a central male character has a powerful and important implication for those watching. The apparent popularity and intelligence of Connell reminds us that depression and anxiety can affect anyone, no matter their social standing.

Mescal’s performance depicts a gradual decline in the character’s mental health. He displays symptoms of withdrawal, low energy, tearfulness and an increasing tendency to disengage from those around him. These typical markers of depression increase in intensity, resulting in an inability to make basic decisions and a break down of communication. Ultimately Connell functions in society but is permanently disengaged.

A pivotal event for the character is the suicide of his school friend. An event that normalises the feelings that many struggle with in silence. Intensely stressful situations are known to exacerbate issues of mental health, a consequence that is true for Connell whose symptoms intensify as he enters a deep depression.

This crucial turning point for the character enables the show to highlight the importance of relationships, kindness and professional help when it comes to recovering from mental illness. Connell’s college roommate is depicted as a gentle source of support and guidance, recommending a free counselling service. The relationship between the boys broadcasts a healthy, stable friendship that is both supportive and realistic. It is a welcome far cry from the stereotypically masculine friendships more commonly portrayed in the media.

Normal People is unique in the way it celebrates male vulnerability, depicting it as a form of bravery. Connell’s recovery is depicted in this way, as he makes gradual progress with the help of friends, therapy and medication. Here, again, the show is beneficially pioneering. In reality men are significantly less likely to access psychological therapies than women and 40% will not talk to anyone about their mental health struggles. 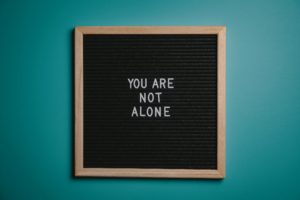 With it’s audience of millions, Normal People has been given an invaluable platform. This it has used heroically when it comes to its messages surrounding mental health. The programme has shown young audiences that it’s ok not to feel ok, and it’s ok to talk about it.

If you, or someone you know is struggling with loneliness, anxiety or any mental illness, we have listed helplines that allow you to speak about your feelings anonymously.